Bye Bye Nokia – A failure of management over leadership

I couldn’t write a marketing, technology and innovation blog without commenting on the demise of one of the world’s once best loved technology brands, Nokia. Recently Microsoft confirmed the brand would dumped following their $7.2b acquisition of the company which was finalized this year. This is my take on what happened.

The time was September 2011, the place an MBA classroom at Henley Business school on the banks of the river Thames in England. The room was full of supposedly bright sparks but we had a tough problem to solve and we were all dumfounded. Up stepped a senior engineer from Nokia (now ex Nokia) who with a few concise words (as is often the way with Finns) and the drawing of a simple graph on the board correctly solved the problem and stunned the class. He was clearly one of the brightest people in the room and I wanted to get his take on what I felt then was the demise of Nokia.

To my surprise, a few years earlier he had been involved in preparing the slide deck for the CTO to present to the Nokia Board regarding touch screen technology. This was prior to the iPhone launch. Nokia had access to this technology before Apple and the technology team at Nokia were keen to implement it but were stopped by the conservative, comfortable and “we know best” attitude of the Nokia Board. “That is where the demise started” I remember him saying. We thought we had an innovative technology answer to a market problem but Nokia’s dominant market position and previous success prevented the Board from backing a technology which may well have ensured they would still be alive today.

The Demise in Numbers

The story is well-known but it’s worth giving it a historical perspective. At the end of 2009 Nokia had a clear market leadership in the global smart phone market at 38.6%. By the end of 2014 that global market leadership position together with the brand had disappeared. In the meantime a new global market leader had been created in the form of Samsung which had gone from 3.3% marketshare to 23.8% market share with 5 years. Now Samsung have their own issues with their market share peaking at 32.5% in 2013 and significantly dropping back in 2014 but it’s still worth asking the question…how did they manage this impressive journey? 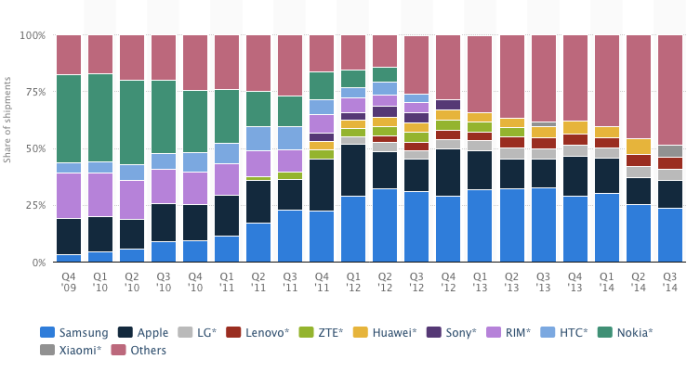 Well the answer in my eyes is quite simple., If you believe in the Geoffrey Moore school of thought, which I do, there are only three ways to unleash the power of innovation. Apart from your failed attempts and waste which is an essential part of innovation and makes up over half of innovation activities, there are only three outcomes/focuses of innovation. A technology development that either differentiates, neutralizes or optimizes your current market offering. In the Samsung case they took the path of neutralization. They looked at Apple’s iphone and decided we are going to offer the market exactly the same product but faster, better cheaper. That’s a bit of a simplistic analysis and one could argue that now Apple are neutralizing against Samsung’s differentiation innovation with the larger screens on the iPhone 6 and improved photography but clearly Samsung’s path to market leadership has come through a neutralization strategy.

Ultimately though this lack of innovation management and understand is a failure right at the top of the Nokia organization. For over a century Nokia had exemplified transformational leadership, evolving itself from a manufacturer of rubber products (Wellington boots and cables) to technology hardware to ultimately to the global market leader in mobile telephony. These transitions must have taken transformational leadership in the form of visionary thinking, risk taking, long-term planning and the careful management of

business transformation and organizational culture. However the leadership team present during the last 5 years (or maybe longer) of Nokia’s demise clearly exerted the traits of transactional management – focused on the short-term and managing the maintenance and improvement of performance. This coupled with often conceited nature of a market leader who think they know their market best due to past performance is ultimately the reason why Nokia exists no more.

As someone who spent much of his career visiting that Espoo Nokia HQ and worked with many marketers and communicators in terms of product development, service and sales I am sad. You were a great bunch of people. Some of the professional and innovative marketers I have worked with. Good luck in the future which will no doubt involve marketing some of the world’s best technology innovations, many of them probably not invented yet.

But let Nokia’s demise be a lesson to us all. In the rapidly changing technology marketplace ensure your top team exerts a transformational as opposed to transactional leadership style and in product and business model development make sure you are clear on whether you are differentiating, neutralizing or optimizing. If you get your choice wrong you will die, if you get it right a global market leadership position is just round the corner, for a little while anyway.

Curious about all things digital, media and marketing. Spent the last 15 years in the converging areas of technology, marketing and media. Currently CMO of Mynewsdesk and father to 3 little Beans.