Stockholm is Hot but The Money and Market is Elsewhere

My experiences this week have confirmed that Stockholm is a great place to be right now if tech innovation is your thing. However the money to fund that innovation all the way to IPO or a major trade sale is to be found elsewhere. On Thursday I attended Hot Topics Stockholm. This invite only event for around 250 people (organised by 360 Leaders) included many of Stockholm’s tech royalty from both the entrepreneurial and investor worlds within the flourishing startup ecosystem. The two panels were moderated in first class fashion by serial entrepreneur and Wrapp CEO Hjalmar Winbladh. The first focused on the need for Nordic startups to look beyond their home region for funding as they grow, the second focused on the internationalisation process itself and the challenges and opportunities it brought with it. Here are my three take aways. 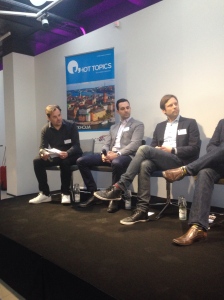 Even though the panels included representative’s from Stockholm’s venture capital elite (Creandum, Northzone, Industrifonden) all were in agreement that with the state of venture capital funds in Europe as they are, it is still US cash that is needed to grow companies to a significant exit. Alan Mamedi, CEO of Truecaller who are fresh from raising $18m from Sequoia Capital talked about the imporatnce of finding a powerful investor who could really add value from more that just a cash perspective in their global journey. Daniel Blomquist from Creandum talked about the early days of their Spotify investment and the realisation from day one that global investment partners would be needed to grow that business which necessitated the involvement of the Chinese investor Li Ka-shing in their Series A ($21m) and ultimately Technology Crossover Ventures in their pre IPO round  ($250m). All the venture capital contributors were happy to see each other as partners with the local firms using their local knowledge and networks to find the deals and the larger funds were happy to come in with muscle at a later stage in order to fuel growth. Manu Gupta, Partner at Lakestar had an interesting take when he suggested it was only a matter of time before the european venture capital funds would have enough muscle to see companies through to bigger exits but for now the US funds are the only route.

Go big…don’t get caught in the European maze

The  internationalisation panel was full of both experience and youth in equal measure. However one common message resonated… go big from day one of do not bother. Hans Otterling from Northzone talked about his multiple experiences with portfolio companies whose demise had centred around getting caught in the European maze.

“…why do Swedish companies always go to Norway first… that’s just the worst market and  France… don’t even bother to go there.”

were some of his memorable comments. Of course much of the conversation focused on winning the market with domination in the US as a major battle ground for most tech companies but with two companies on the panel, Klarna and iZettle who have yet to enter the US the focus turned to opportunities in large markets. It’s not just the US that offers the benefits of scale, China, India and even Africa offer monumental opportunity for the right value proposition. Theis Sondergaard, co-founder of the wine app Vivino talked about the surprise his team had experienced when discovering Brazil was one of their most popular markets as people there were using the app as a social network. In any case consensus was that whatever the market it needed to have the ability to provide the scale to match the ambition, funding and reality of a globalised world that mobile and web distibution presents. However Måns Hultman, founder and former CEO and Chairman of Qliktech had perhaps the best quote of the panel when he concluded,

“Don’t forget that its better to be something in a small market than nothing in a global market.” 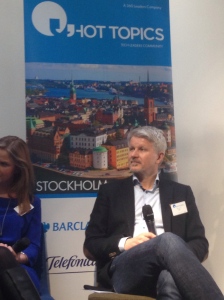 Stockholm is hot because we lead with product

There was lots of optimism from both the entrepreneurial community and the investors that are all continually competing to spot the next best deal. What was clear was that Stockholm as a centre of innovation and technology is clearly extremely interesting right now. It may not be blessed with the best ecosystem and government and regulatory support although this has seen significant improvement over the last 18 months, however there is one fact that makes it a draw for every international venture capital investor. As Katja Bergman, Chief Investment Officer at MOOR commented,

“Stockholm is hot because it is full of product led companies”

I can’t agree more with this sentiment. Whilst the Nordics may lack both the money and the marketing and sales skills of our US counterparts it more than makes up for this in product, design and UX capabilities that judging by this event are the envy of the world. When you have two representatives from two of the world’s largest venture capital funds telling you that they wish they could spend more time in Stockholm and asking how they could plug themselves into the local startup eco system you know you are living in an exciting place. The money and the markets will always be there for the right products which solve interesting problems and my prediction is just like MSQL, Qliktech, Skype, Spotify and King.com before them Stockholm will continue to produce world beating companies over the next few years.

Curious about all things digital, media and marketing. Spent the last 15 years in the converging areas of technology, marketing and media. Currently CMO of Mynewsdesk and father to 3 little Beans.